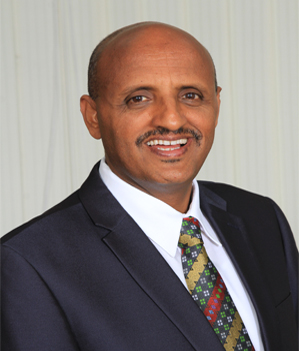 Tewolde GebreMariam was appointed as Group Chief Executive Officer of Ethiopian Airlines in January 2011. He began his career at Ethiopian in 1985 as Transportation Agent and held a number of senior leadership positions in different divisions in the Airline including Ethiopian Cargo, Area Offices and Sales & Marketing. In his role as CEO, Mr. Tewolde has been a multiple award winner including ‘African CEO of the Year’, ‘Best African Business Leader’, ‘The Airline StrategyAward for Regional Leadership’, ‘TheMost Gender Focused CEO Award’, Most Influential People of African Descent‘Airline Executive of the year Award’, ‘Africa’s Business Man of the YearAward and He was also among 100 most influential Africans for 2 consecutive years in 2019 and 2020.

Mr. Tewolde also serves as a member of the High-Level Advisory Group on Sustainable Transport with United Nations, Chief Executive Board member of Star Alliance, Board member of International Air Transport Association (IATA) and Airlink Advisory Council. Additionally, he is an Executive Committee member of the African Airlines Association (AFRAA), a member of Board of Directors of Africa Travel Association (ATA) and Board of Directors of Ethiopian Tourism Organization (ETO).Mr. Tewolde graduated from AddisAbaba University with B.A. Degree in Economics. He earned his Master’s Degree in Business Administration from Open University in the United Kingdom. He has received Honorary Degree of Doctor of Humane Letters Honoris Causa from Addis Ababa University in July2019.