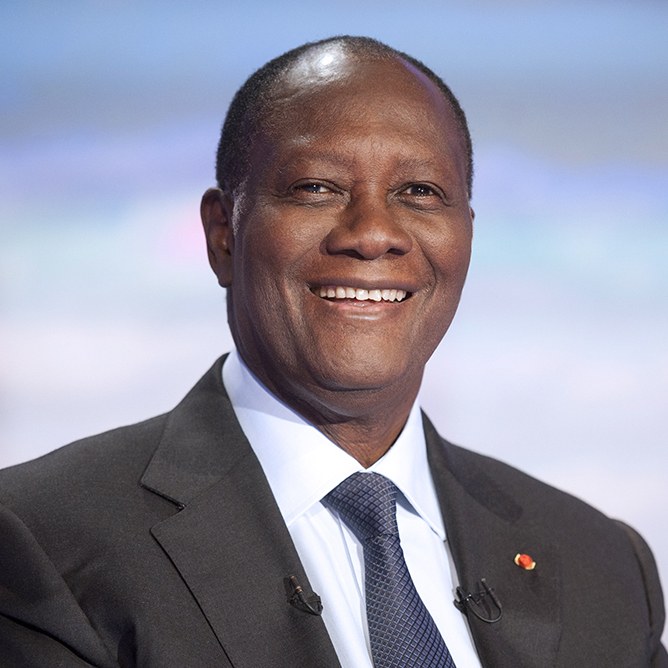 Alassane Ouattara was born on January 1, 1942, in Dimbokro, to the late Dramane Ouattara and Hadja Nabintou Ouattara née Cissé. He is married and has four (4) children. He did his primary and secondary studies in Côte d’Ivoire, then in Haute Volta, now Burkina Faso, where he brilliantly obtained his Baccalaureate, Elementary Mathematics series, in 1962.

He then received an American scholarship that allowed him to continue his studies at the Drexel Institute of Technology, then at the University of Pennsylvania in Philadelphia, from where he obtained, in 1967, a Master of Economics. This diploma offered him a position as an economist at the International Monetary Fund (IMF) in April 1968. Eager to learn, Alassane Ouattara continued his studies until he obtained a Ph.D. in Economics in May 1972.
A year later, he joined the Central Bank of West African States (BCEAO) in Paris and became its Vice-Governor at the age of 40. In November 1984, he returned to the IMF as Director for Africa. In October 1988, he succeeded Abdoulaye Fadiga as head of BCEAO.
In April 1990, when Côte d’Ivoire was shaken by an unprecedented crisis, President Félix Houphouët-Boigny called him to his side, first as Chairman of the Interministerial Committee for the Coordination of the Stabilization and Economic Recovery Program, then on November 7, 1990, as Prime Minister, Head of Government.

Upon the death of President Houphouët-Boigny on December 7, 1993, Alassane Ouattara returned to the IMF, where he was appointed Deputy Managing Director in July 1994.

In July 1999, he ended his involvement with the IMF and returned to Côte d’Ivoire to head the Rally of Republicans of Côte d’Ivoire (RDR).
On May 21, 2011, he was elected 5th President of the Republic with 54.10% of the vote. Once in power, he implemented many economic reforms that will transform Côte d’Ivoire and improve the living conditions of Ivorians.
Thanks to this positive record, Alassane Ouattara was re-elected on October 25, 2015, in the first round, with 83.66% of the vote, for a second term.
In 2020, following the tragic death of Amadou Gon Coulibaly, designated candidate of the Rassemblement des Houphouëtistes pour la Démocratie et la Paix (RHDP), a few months before the presidential election, Alassane Ouattara was forced to reverse his decision and run for president. He won in the first round of voting, with 95% of the votes cast.