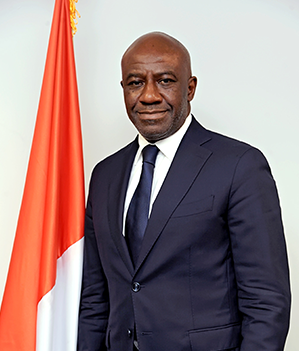 Roger Félix ADOM, Minister of Digital Economy, Telecommunications and Innovation Born in 1966 in Paris, of Ivorian parents, Roger Félix Adom obtained his engineering degree from the National graduate school of mechanics, now the Central School of Nantes, and completed his training with an MBA from the Institute of Business Administration of Paris.He began his career as a consultant with the Capgemini group and then with the EY firm (company). In July 2003, he was appointed Director of Information Systems for the Orange Côte d’Ivoire group before becoming Deputy Managing Director. In 2010, Roger Adom was promoted within the Orange France group based in Paris, where he became Director of Information Systems for the Africa, Middle East and Asia zone. In March 2017, Roger Adom joined the African Development Bank (AfDB), in Abidjan, as Director of Information Technology. In March 2020, he was appointed General Manager of Vivendi Africa in Côte d’Ivoire, a position he held for a few months, before joining the Government of Côte d’Ivoire. He was appointed Minister of Administration Modernization and Public Service Innovation on May 13, 2020, and then Minister of Digital Economy, Telecommunications and Innovation on April 6, 2021. During the handover ceremony, which took place on April 8, 2021, the Minister was elevated to the rank of Commander of the Ivorian Order of Merit of the Digital Economy. On October 15, 2021, he received the distinction of Officer of the National Order